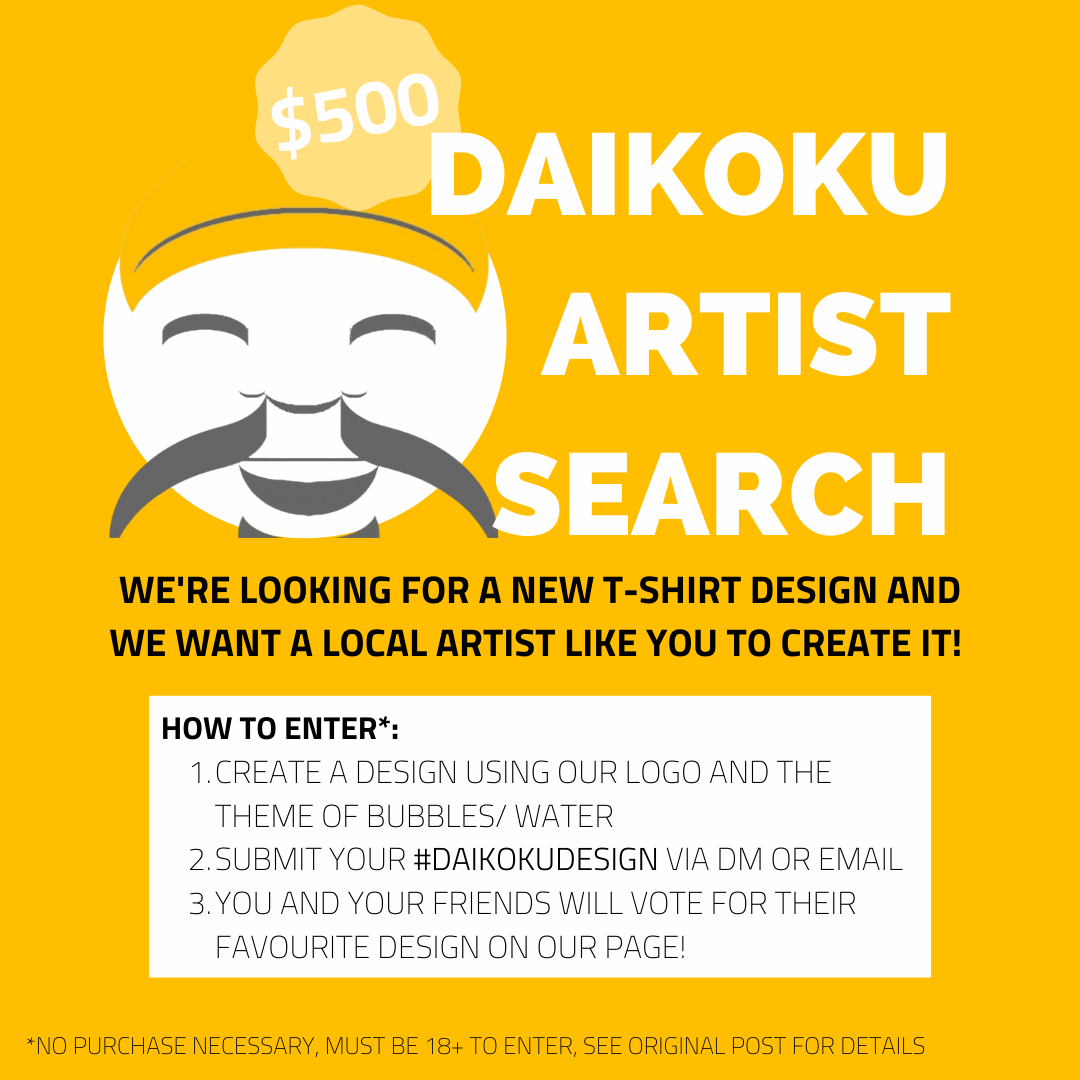 We are on a mission to find an Edmonton artist to help design a Daikoku-esque image for our new t-shirts. (This way, we get to combine our love for Edmonton with our love for the arts!) We’ll be letting our following vote for their favourite design. The winning design will receive a $500 award for their creation. The winning design will be used principally on our t-shirts, but might also be featured on other swag!

Sounds like something up your alley? Great! Here’s now you can enter:

Here are some additional details you should note:

What’s the relationship between Creativity and Cannabis?

“I am convinced that there are genuine and valid levels of perception available with cannabis (and probably with other drugs) which are, through the defects of our society and our educational system, unavailable to us without such drugs.”

Creativity is the use of the imagination or original ideas. We typically associate this to the production of artistic works, but of course, it can extend to problem-solving and many other aspects of our lives.

So can cannabis help us tap creative reserves?

The answer is: it’s complicated. (Did you really expect anything different?)

A word on the studies

There are few studies that have been conducted specifically to study the relationship between creativity and cannabis. The studies referenced herein used timed word association and other linguistic creativity games.

Does weed make you creative, or do you smoke weed if you’re creative?

Open minded, curious and adventurous: this set of adjectives can describe creative people and… and people who try cannabis. Or, well, most drugs. (See the quote attributed to Carl Sagan above.)

Many celebrities associated with creative works, like Snoop Dogg or Lady Gaga, openly admit to consuming ganja. Carl Sagan, Bill Gates and Steve Jobs are other tokers who have used creativity in a different vein.

We can’t be certain which way the correlation runs.

How much is the right amount?

In the studies, low doses of THC seemed to improve results in word-association games. On the other hand, higher THC quantities tended to impact the results negatively.

It’s also interesting to note that the studies didn’t report CBD content or terpenes, if there were any present. Therefore conclusions shouldn’t be made on cannabis as a whole, but should be limited to THC.

That being said, the well known axiom of “Start low, go slow” is particularly important when you want to be able to enhance, rather than detract from, your creativity.

How much THC then?

So what actually happens?

Studies have confirmed a correlation between creativity and cannabis in low dosages. There are many hypothesis to explain the link.

Similarly to alcohol, cannabis lowers or can even eliminate inhibitions. People are less fearful of trying different methods or experimenting with new concepts.

Cannabis can also be a stimulant, and all stimulants, like coffee, can boost problem solving and focus, though not creativity directly.

Lastly, certain people can, on advice of their medical practionner, treat anxiety and depression through cannabis. Treating their symptoms allows them to undertake endeavours they would otherwise not have done, and thus can be seen as a means of explaining the relationship.

Cannabis packaging has changed quite a bit since the legacy market days. It certainly feels like it’s gotten a lot bulkier! As Licensed Producers (LPs) navigate regulations, packaging varies wildly from one brand to another. That being said, it doesn’t all have to go to the landfill. In simpler times, we were able to offer in-store recycling solutions. These days those recycling programs have been put on hold. As a result, lots of people let us know that their packages seem to be piling up.

So what can you do with it all?

Depending on the container material, there’s numerous ways to recycle your cannabis packaging.

Keep on reading for all you need to know on properly recycling your cannabis containers. We even included information on how you can repurpose your containers into items worthy of shelf displaying.

One of the most common cannabis containers on shelves these days are plastic jars. These jars come in a range of colours, but are most often white. The good news is, plastic containers are recyclable. Add them to your regular recycling bag; items must be empty, clean, and dry.

Tin containers are exclusive to Canopy products, such as Tweed and LBS. They are not recyclable. However, there are many ways that these containers can be repurposed. Once we hit stage 3 of opening, consider dropping them off at the Edmonton Reuse Centre. In the meantime, try getting creative with your containers. Use them to hold other small items or even turn them into a decorative succulent pot (see below for instructions).

Glass jars are the latest to hit shelves, and are often the jar of choice for organic cultivators such as, Simply Bare and Good Buds. Glass is great because it is both recyclable and repurposable. You can add your glass jars to your regular recycling bag; items must be clean, empty, and dry. However, if you’re looking to give your jars new life, try repurposing them into an adorable succulent pot.

Repurposing your jars doesn’t have to be complicated. Succulents are incredibly durable plants that are the perfect size for your old cannabis containers. Once your plant is potted you’ll only need to water it about once a week or when soil feels dry.

Tip: Adding a layer of charcoal and moss can help further prevent your plants from being overwatered

Your new cannabis beverages may look similar to your other beverage options, but can they be recycled in the same way? The answer is, yes! Your cannabis beverage bottles and cans can be returned for a refund at your local bottle depot.

Yup, you guessed it, your cardboard boxes are definitely recyclable. Just make sure they’ve been flattened, clean, and dry. If you’re into composting some packaging, such as from Kolab and Foray, can be added to your compost bin.

Check out our Instagram post for a quick on-the-go cannabis recycling guide, or download the Edmonton Waste Wise app for in-depth information on recycling. As always, if you’re ever uncertain feel free to ask our Budtenders! They’re always happy to answer any and all cannabis inquiries you may have.

Mixing things up with Mix-Ins

Edibles and oils are one of the easiest ways to get acquainted with cannabis. However, some of these products, like mix-ins, are a little different than what we see on the market.

Beverage drops and distillate powder are an interesting take on oils. Rather than consuming the product directly (as you would an oil), you incorporate a few drops, or a pack of powder into a beverage or food.

These products have a distinctive taste in order to let consumers know that what they’re ingesting contains cannabis products.

Which can make pairing it to something a bit tricky.

Here are some suggestions:

Why this works: See above regarding fat absorption; a strong flavoured oil, like olive (not extra virgin!) aligns with the flavour of the cannabis products, while the other ingredients allow for a full flavour that takes the focus away from bitterness.